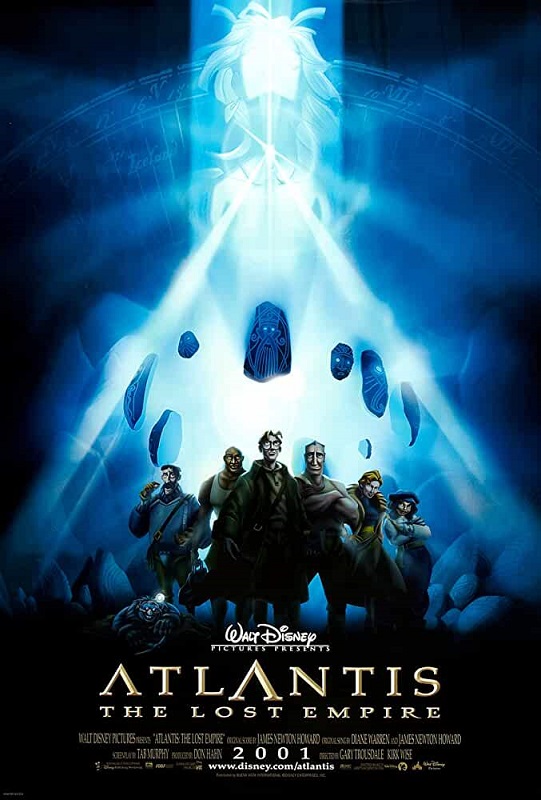 Atlantis: The Lost Empire is a 2001 American animated science-fantasy action–adventure film created by Walt Disney Feature Animation, marking the 41st entry in Disney’s animated features canon and its first science-fiction film. Written by Tab Murphy, directed by Gary Trousdale and Kirk Wise, and produced by Don Hahn, the film features an ensemble cast with the voices of Michael J. Fox, Cree Summer, James Garner, Leonard Nimoy, Don Novello, Phil Morris, Claudia Christian, Jacqueline Obradors, Jim Varney (in his final role), Florence Stanley, John Mahoney, David Ogden Stiers and Corey Burton. Set in 1914, the film tells the story of a young man who gains possession of a sacred book, which he believes will guide him and a crew of mercenaries to the lost city of Atlantis.

Development of the film began after production had finished on The Hunchback of Notre Dame (1996). Instead of another musical, the production team decided to do an action-adventure film inspired by the works of Jules Verne. Atlantis was notable for adopting the distinctive visual style of comic book creator Mike Mignola. The film made greater use of computer-generated imagery (CGI) than any of Disney’s previous traditionally animated features, and it remains one of the few to have been shot in anamorphic format. Linguist Marc Okrand constructed an Atlantean language specifically for use in Atlantis. James Newton Howard provided the film’s score. The film was released at a time when audience interest in animated films was shifting away from hand-drawn animation toward films with full CGI.

Atlantis: The Lost Empire premiered at the El Capitan Theatre in Hollywood, California on June 3, 2001, and went into general release on June 15. Released by Walt Disney Pictures, Atlantis performed modestly at the box office. Budgeted at around $90-120 million, the film grossed over $186 million worldwide, $84 million of which was earned in North America. Due to the film’s lackluster box office performance, Disney quietly canceled both a spin-off television series and an underwater attraction at its Disneyland theme park. Some critics praised it as a unique departure from typical Disney animated features, while others disliked it due to the unclear target audience and absence of songs. Atlantis was nominated for a number of awards, including seven Annie Awards, and won Best Sound Editing at the 2002 Golden Reel Awards. The film was released on VHS and DVD on January 29, 2002, and on Blu-ray on June 11, 2013. Atlantis is considered to be a cult favorite, due in part to Mignola’s unique artistic influence. A direct-to-video sequel, Atlantis: Milo’s Return, was released in 2003.

A massive tidal wave, triggered by a distant explosion, threatens to drown the island kingdom of Atlantis. In the midst of an evacuation from the capital city, the Queen of Atlantis is caught by a strange, hypnotic blue light and lifted up into the “Heart of Atlantis”, a powerful crystal protecting the city. The crystal consumes her and creates a dome barrier that protects the city’s innermost district. She leaves behind a young daughter, Princess Kida (Cree Summer), as the island sinks beneath the ocean.

Several thousand years later, in 1914, Milo Thatch (Michael J. Fox)—a cartographer and linguist at the Smithsonian Institution who is marginalized for his research on Atlantis—believes that he has found The Shepherd’s Journal, an ancient manuscript allegedly containing directions to the lost island. After his proposal to search for the Journal is rejected by the museum board, a mysterious woman, Helga Sinclair (Claudia Christian), introduces Milo to Preston B. Whitmore (John Mahoney), an eccentric millionaire. Whitmore has already funded a successful effort to retrieve the Journal as repayment of a debt to Milo’s grandfather and recruits Milo to lead an expedition to Atlantis as soon as he deciphers it.

The expedition departs with a team of specialists led by Commander Rourke (James Garner), who also led the Journal recovery expedition. The crew includes Vinny (Don Novello), a demolitions expert; Mole (Corey Burton), a geologist; Dr. Sweet (Phil Morris), a medical officer; Audrey (Jacqueline Obradors), a mechanic; Mrs. Packard (Florence Stanley), a radio operator; and Cookie (Jim Varney), a mess cook. They set out in the Ulysses, a massive submarine, but are soon attacked by the monstrous Leviathan, a robotic lobster-like creature that guards Atlantis’ entrance. The Ulysses is destroyed but Milo, Rourke, and part of the crew escape and make their way to a cavern, described in the Journal as the entrance to Atlantis.

After traveling through a network of caves and a dormant volcano, the team reaches Atlantis. They are greeted by Kida—who, despite her age, resembles a young woman—and discover that the Atlantean language is the basis of many existing languages (which allows the Atlanteans to understand English). Kida enlists Milo’s aid in deciphering Atlantean writing, long forgotten by the natives. By swimming deep within the city’s submerged ruins and translating underwater murals, Milo helps Kida uncover the nature of the Heart of Atlantis: it supplies the Atlanteans with power and longevity through the crystals worn around their necks. He is surprised this is not mentioned in the Journal, but upon examination realizes a page is missing.

Returning to the surface with Kida, Milo discovers Rourke has the missing page. Rourke and the crew betray Milo, intending to bring the crystal to the surface and sell it. Rourke mortally wounds the King of Atlantis (Leonard Nimoy) while trying to extract information about the crystal’s location, but finds its location for himself hidden beneath the King’s throne room. The crystal detects a threat and merges with Kida. Rourke and the mercenaries lock Kida in a crate and prepare to leave the city, knowing that when the crystal is gone the Atlanteans will die. Milo berates his friends for betraying their consciences and ultimately convinces them to leave Rourke and remain in Atlantis. The King explains to Milo that the crystal has developed a consciousness; it will find a royal host when Atlantis is in danger. As he dies he gives his crystal to Milo, telling him to save Atlantis and Kida. Encouraged by Sweet, Milo rallies the crew and the Atlanteans to stop Rourke.

In a battle inside the volcano, Helga and the other mercenaries are defeated, including Rourke, killed when Milo slashes his arm with a crystal shard. As Milo and the others fly the crystal back to the city, the volcano erupts. With lava flowing towards the city, Kida (in her crystal form) rises into the air and creates a protective shield. The lava breaks away harmlessly, showing a restored Atlantis, and the crystal returns Kida to Milo. The surviving crew members return to the surface and promise to keep the discovery of Atlantis a secret. Milo, in love with Kida, stays behind to help her rebuild the lost empire.

Please ! If you are copying any content from this site please take permission first.