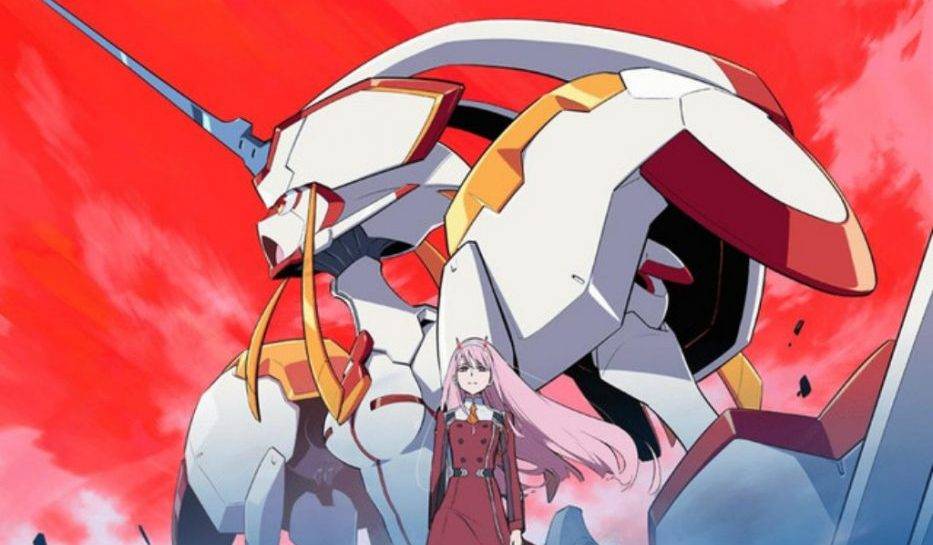 Darling in the Franxx (Japanese: ダーリン・イン・ザ・フランキス, Hepburn: Dārin In Za Furankisu), abbreviated as DarliFra (ダリフラ, DariFura), is a 2018 Japanese science fictionromanceanime television series co-produced by A-1 Pictures and Trigger, and animated by Trigger and CloverWorks that premiered on January 13, 2018. The series was announced at Trigger’s Anime Expo 2017 panel in July 2017. A manga adaptation by Kentaro Yabuki and another four-panelcomic strip manga began serialization on January 14, 2018.

Darling in the Franxx is set in a dystopian future where degenerates are artificially created and indoctrinated solely to defend the remnants of civilization. The story follows a squad of ten pilots, particularly focusing on the partnership between Hiro, a former prodigy, and Zero Two, a hybrid human and elite pilot who aspires to become entirely human.

Darling in The Franxx Synopsis

Darling in the Franxx takes place in a dystopian post-apocalyptic future where the remnants of human civilization have abandoned the surface. Adults and children exist in contrasting environments from each other. Adults live in technologically-advanced cities within Plantations and are immortal, but procreation and relationships among them have become obsolete and undesirable. Artificially-created children, termed “parasites”, are deprived of individuality and are educated only for piloting Franxx in pairs to defend humanity. The children are kept in isolation from adult society in environments nicknamed “birdcages”, which emulate that of a bygone era, so that they can develop the emotional responses required to pilot Franxx.

In the early 21st century, the progress of human civilization was accelerated by ground-breaking discoveries in mining technology, allowing extraction of magma energy for a new low-cost, all-encompassing energy source. Scientists contributing to the breakthrough form “APE”, an organization that would gain a large influence on world politics and the global economy as a result of their discoveries. After discovering human immortality, much of mankind opted to become immortal despite the side effect of losing their reproductive functions. A cult of personality surrounds Papa, the chairman of the APE which all humans come to worship akin to a god. Now governing the remnants of civilization, APE leads humanity to abandon Earth’s now desolate surface for the relative safety of mobile fortress-cities known as Plantations.

Darling in The Franxx Plot

Pushed to the brink of extinction in a post apocalyptic world, humanity is under constant threat from giant creatures known as klaxosaurs (叫竜, kyoryū), which are sub-divided into at least four categories based on their size: “Conrad”,[d] “Mohorovičić”,[e] “Gutenberg”[f] and “(Super) Lehmann”.[g] Pushed to the brink of annihilation, parasites are raised to pilot giant mecha known as Franxx[h] (フランキス, Furankisu) in boy-girl pairs. A male parasite is termed a “stamen” and a female parasite is referred to as a “pistil” (the male and female reproductive parts of a flower, respectively). Parasites are artificially-created and have short lifespans.

A team of ten parasites is assigned to the experimental Squad 13 of Plantation 13. One of them, Hiro (Code:016), is a former pilot-candidate prodigy who can no longer synchronize with his partner and they both fail to complete the training program. While skipping his squad’s graduation ceremony, Hiro encounters Zero Two (Code:002), an elite Franxx pilot with klaxosaur blood, red horns, and an infamous reputation as the “Partner Killer”. It is rumored that Zero Two’s partners are killed after pairing with her by the third time. Shortly after, a Klaxosaur attacks, disrupting Hiro’s graduation ceremony and leaving Zero Two’s partner killed in action. Despite the rumors, Hiro volunteers to become her new partner, or as Zero Two calls him, her “darling”.

18 thoughts on “Darling In The Franxx Hindi Dub | Episode 4”