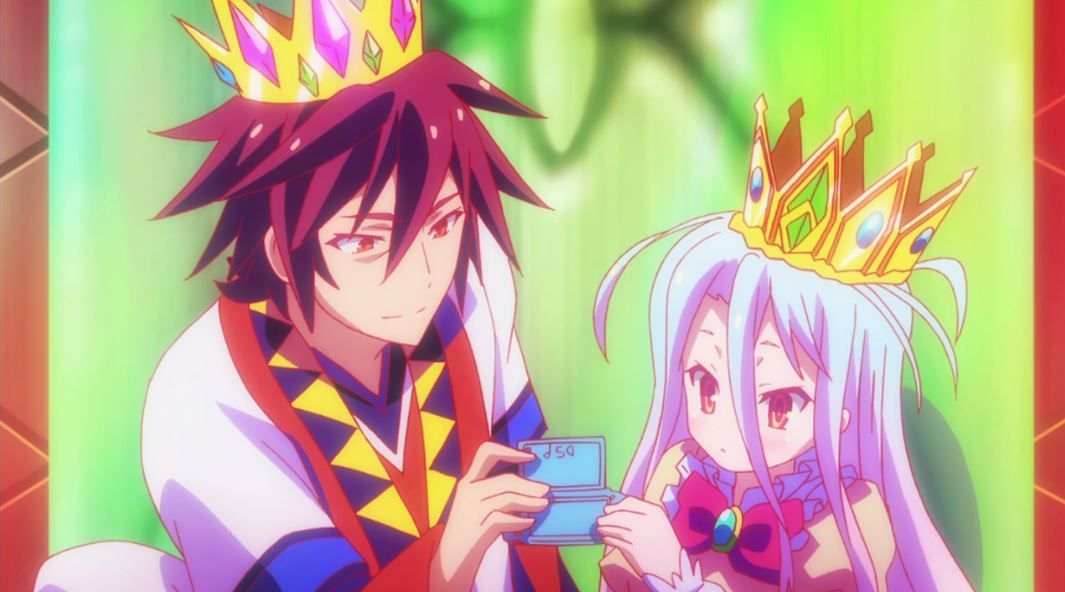 No Game, No Life Zero (Japanese: ノーゲーム・ノーライフ ゼロ Hepburn: Nōgēmu Nōraifu Zero) is a Japanese animated film based on the light novel series No Game No Life by Yuu Kamiya. The film was directed by Atsuko Ishizuka at studio Madhouse. It premiered in Japan on July 15, 2017. The film has been licensed by Sentai Filmworks in the North America, Madman Entertainment in Australia and New Zealand, and by MVM in the United Kingdom and Ireland.

No Game No Life Zero Plot

Izuna and Tet play a game to wager food. As they continue their next game, Tet tells her of a story from 6000 years ago, during the Great War. The Old Deus have driven humankind to the brink of extinction as war is raged upon the heavens and the earth in their quest to become the One True God. Riku, the leader of humanity’s last colony along with his sister Corounne, lets another one of his companions die in a Demonia attack while sourcing for information, plaguing him with nightmares and guilt. The colony is at a loss for what to do with their leader in this state, their reducing numbers, and the frequent battles that endanger their lives around the area.

The next day, Riku returns to an Elvish hideout he found to investigate. There, he stumbles upon an Ex-Machina that requests for procreation in order to understand the human heart, an idea that defies logic. Although he initially refuses, his eyes light up at the prospect of a chess game she challenges him to, despite knowing Ex-Machinae’ frightening calculation abilities. Riku loses and they agree to a terms of exchange whereby he gets to take advantage of her logical prowess, and in return she will stay with him and learn about the human heart. With only a designation code assigned to her, Riku names her Schwi, as a short-form for Schwarzer which means “black” in German, after her hair.

Schwi accidentally forces Riku to confront the people he made die. While this causes a quarrel between them it helps her gain a deeper understanding into Riku’s personality and helps him face his trauma. Through working together, both realize that they make an incredible team. They devise a plan to break into the core of the planet to achieve the Suniaster, a legendary instrument designed to give the strongest the power of One True God, by utilising the powers generated from the spirit circuit of all the races, and Schwi’s machinery to shift its direction.

Riku proposes to Schwi despite the differences in their races and the latter previously destroying the former’s last home. When he starts to fall apart though, Schwi decides to acquire the Suniaster herself so that he will not die, inevitably meeting Jibril. A vicious battle ensues and Schwi dies, but remembers to lay the last foundations of their plan by reconnecting with her cluster of Ex-Machina and employing them to help Riku. As Jibril deals the last strike, Schwi uses the last of her energy to protect Riku’s wedding ring, and Jibril, having exhausted all her power, temporarily reverts to a younger form and is put out of action.

Devastated by Schwi’s death, Riku forces himself to complete the plan, but his body fails at the last second. He prays aloud to a God of Games he used to play with as a child, to take the Suniaster and end the war. Tet, having spawned from Riku’s imagination, grants his wish and changes the world forever.

Returning to the present, Izuna notices remarkable resemblance of Schwi and Riku to Shiro and Sora, and their team being the descendants. Together, they look towards the future, ready to begin the game.

Thanks for visiting here please visit our more dub and sub and share with friends also.

2 thoughts on “No Game No Life Zero Movie Hindi Subbed”