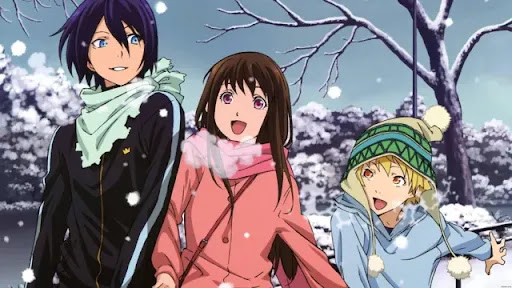 Noragami (ノラガミ, lit. “Stray god”) is a Japanese manga series by Adachitoka. It began serialization in Kodansha‘s Monthly Shōnen Magazine in January 2011’s issue. The series has been collected into eighteen tankōbon volumes as of February 2017. An anime television series adaptation by Bones aired in Japan beginning from January 5, 2014 to March 23, 2014, with a total of 12 episodes. The second season, entitled Noragami Aragoto (Japanese: ノラガミ ARAGOTO, lit. Stray god fighting scene),[2] aired in Japan from October 2, 2015 to December 25, 2015, with a total of 13 episodes.

Hiyori Iki is a normal middle school student until she was involved in a bus accident while trying to protect a stranger. This incident causes her soul to frequently slip out of her body, and she becomes aware of the existence of two parallel worlds: the Near Shore, where regular humans and creatures reside, and the Far Shore, where demons and human souls linger. Through her soul, she meets the strange,

nameless god without a shrine, Yato. Yato is determined to make a name for himself out there by accepting any wishes for 5 yen, including Hiyori’s to fix her body. Along with Yato’s Regalia — a weapon from a human soul named by the god in question — Yukine, the trio go through many adventures struggling with their friendship, identity and pasts.