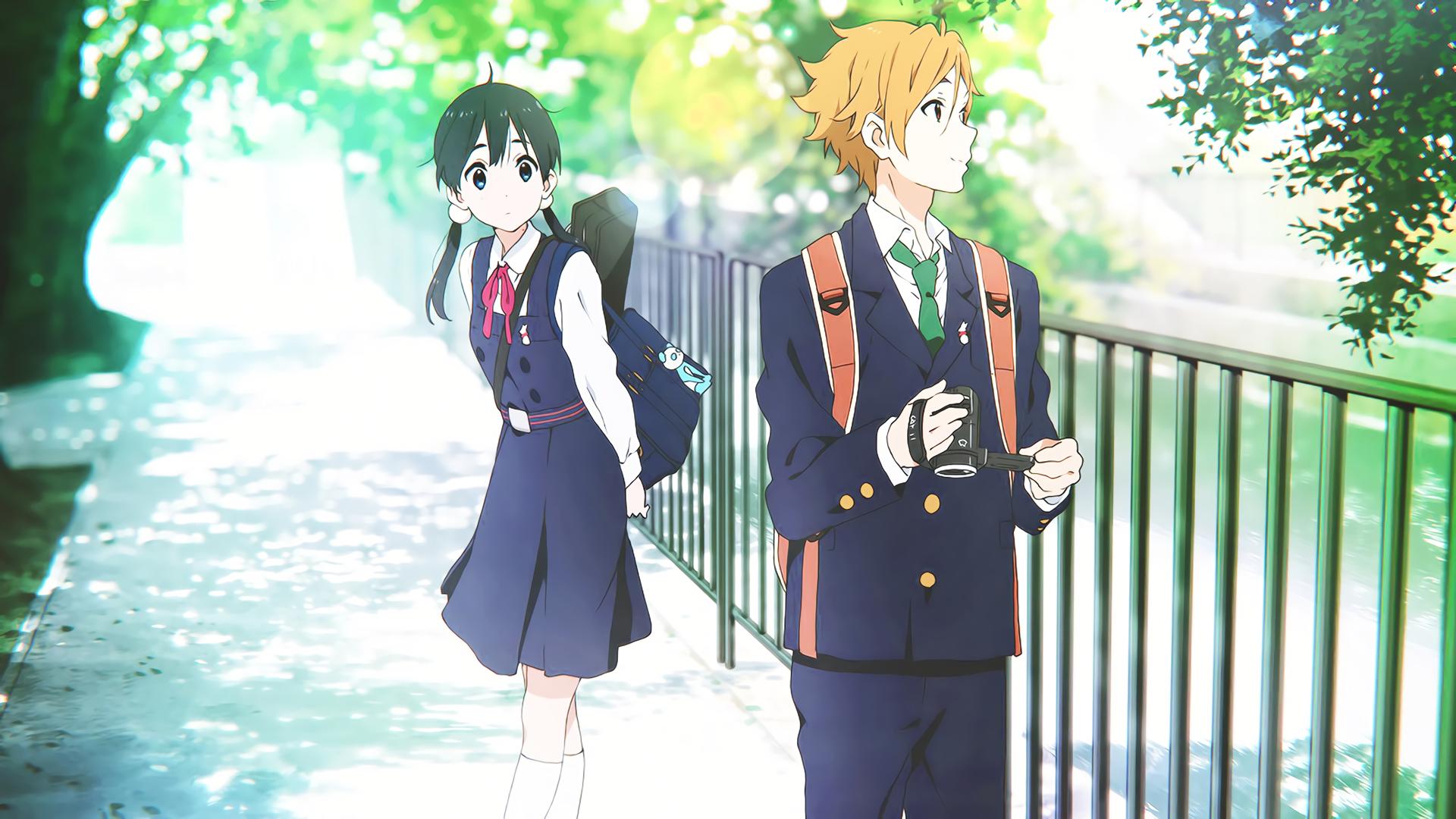 Tamako Love Story (たまこラブストーリー) is the 2014 animated romantic comedy sequel to the anime series Tamako Market produced by Kyoto Animation and distributed by Shochiku Company Limited, premiering in Japan on April 26th, 2014.[1] It was directed by Naoko Yamada, and produced by Shinichi Nakamura. Its theme song “Principle” was performed by voice actress Aya Suzaki, and the blu-ray was released on October 10, 2014.[2]

The film opens on a tropical island and re-introduces the talking bird Dera Mochimazzi, who is narrating and recalls of the people back at Usagiyama Shopping District. Prince Mecha and Choi Mochimazzi are making mochi, and the latter scolds Dera for lazying in front of the prince. Mecha offers to bring drinks, where meanwhile Dera suggests new mochi ideas which are both misinterpreted as perverted concepts by Choi.

At the shopping district, Mochizō breaks up a fight between Mamedai and his father, Gohei, and is encouraged by his childhood friend Tamako Kitashirakawa. He muses that though not many have realized it, he is in love with said childhood friend, having known her since they were infants.

Later in the high school gym, Tamako practices baton twirling with her best friend Midori Tokiwa. After tossing it up in the air, she fails to catches it, the rod smacking onto her head. This, added up with her inability to catch a string phone with Mochizō and recognizing his feelings, indicates her imperceptible attitude to mature quickly. Meanwhile, Kanna Makinowanders in the school hallways; while doing so, a flyer of the Usagiyama Marching Festival catches her eye. She convinces the rest of the baton club to perform at the festival, wanting to make an impact for their memories.

At the same time, Mochizō looks over a film he and his club recently made featuring bears and an apple. While doing so, he becomes distracted and starts looking over videos of Tamako, noting that she looks more “sparkly” than usual since they’ve hit the spring season. His short-statured friend, Inuyama points out a booklet for a university, to which Mochizō replies he’s applying for one in Tokyo. When both Inuyama and Momotarō question his decision, adding that he’ll be separated from Tamako, Mochizō implies he will confess to her soon.

Following the end of the school day, Tamako, Midori, Kanna, and the additional member of Shiori Asagiriwalk home together. Shiori brings up the question of their future plans after high school. Tamako wants to continue her work for Tama-ya, Shiori is considering going overseas to study English literature, Kanna desires to work in architecture (while admitting though she is afraid of heights, she knows she’ll be able to overcome this phobia), and Midori wishes to attend a local college. After hearing of their plans, Tamako notes somewhat sadly to herself that everyone has put into more thought to their future whereas she herself hasn’t.

Tamako greets the shopkeepers of the shopping district she lives in, all of whom she is familiar with. She stops at the coffee shop owned by Kunio Yaobi for a drink. Meanwhile, Mochizō has just arrived home. At home, his father Gohei deliberately turns the other cheek, pouts, and leaves upon seeing him return home. His mother Michiko tells him not to pay mind to his stubborn father, and approves of Mochizō’s decision of Tokyo. She mentions that it’s better to hurry and confess to his crush, whereas Mochizō appears embarrassed and hesitant.

He decides to confess to Tamako via string phone. Before finishing his confession to her, however, he realizes he was speaking to her younger sister Ankothe entire time, explaining why the cup was caught in the first place. Mochizō decides to postpone his confession for later, and goes to the bathhouse where he coincidentally meets up with Tamako and Anko before they’ve gone inside. Startled, he drops his belongings, and is unable to respond to Tamako’s curiosity why he wanted to speak to her earlier.

Though he tries to speak to her at school, this is interrupted by the presence of Midori. While he is waiting for Tamako, Midori reminds that until now he hasn’t shared any classes with Tamako and criticizes him for always staring at her. Nonetheless, she tells him to keep it at that, to which he replies that he’s going to a university in Tokyo regardless. Although shocked, Midori pressures him to hurry and confess to Tamako despite her statements earlier. Afterwards, Tamako and Mochizō arrange to meet up at the riverbank after school.

At the riverbank while the two are reminiscing, Tamako trips and nearly falls into the river. Mochizō catches her, though she quickly realizes he still hasn’t released his hold on her wrist. He takes this chance to reveal to her that he will be attending a university in Tokyo, and that he is in love with her. Flabbergasted, Tamako excuses herself and runs away from him, forgetting her bag in the process.

Following his confession, Tamako stays shell-shocked for the remainder of the week. It distracts her from making mochi, speaking to Mochizō, or practicing the baton properly. Though she claims it is a fever, in reality she has trouble on delivering an answer to Mochizō. At gym, Tamako confesses her troubles to Midori. She notes that Mochizō wasn’t like himself. There are moments when she has tried to confront Mochizō with the assistance of her friends, but none of them achieve her objective. Shiori tells Tamako of her own plans of going abroad to study English, and says that there is a first time for everything. This provides Tamako as inspiration to confront Mochizō. During this, it is evident that Midori is upset over Tamako’s feelings for Mochizō.

When Mochizō returns home, he discovers that Tamako’s grandfather is being rushed to the hospital. He comforts Tamako and goes with her. After it is confirmed that her grandfather merely choked on a mochi, Tamako and Mochizō sit in the waiting room. He tells her to forget what he confessed back at the riverbank.

The baton club perform well, though Mochizō does not attend to record it like he usually does. That afternoon, Midori lies to Tamako that Mochizō is leaving that day (when in reality, he is just checking on the university rather than entirely moving at the moment). This prompts Tamako to bring the cup phones and hurry to the bullet train station. Meanwhile, Midori helps Kanna get over her fear of heights, helping her see the view from the tall tree. Tamako stops Mochizō from boarding the train, and begs him not to leave. Giving him the cup phones and allowing him to throw a cup phone at her, she catches it.

Tamako holds it up and confesses that she loves Mochizō.