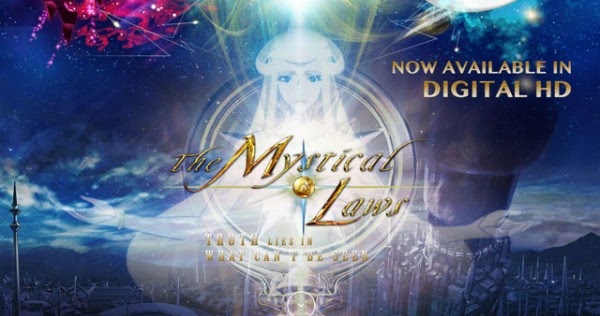 In the near future, the Earth is being taken over by the Godom Empire and only two people can stop the aggressors.
Initial release: 2012
Director: Isamu Imakake
Music director: Yuichi Mizusawa

A religious tract masquerading as a Japanese anime fantasy, The Mystical Laws was created and executive produced by Ryuho Okawa, the founder of a religion dubbed “Happy Science.” The movement, incorporating the teachings of Muhammad, Jesus, Buddha and Confucius—talk about hedging your bets!—informs this turgid epic which is one of the contenders for this year’s animated film Oscar.

Set in 202X, whenever that is, the film concerns the impending destruction of Earth as masterminded by the Godom Empire, led by the villainous Tathagata Killer, who faces little resistance thanks to the apparent helplessness of that former superpower, the United States, and the aid of “Mystical Technology” supplied by the beautiful Chan Leika, the CEO of a mysterious trading company.

Fortunately, the planet has a savior in the form of Sho Shishimaru, part of a mystical organization named Hermes Wings who is hailed by Indian monks as the second coming of Buddha (which also, as it happens, is a claim made by executive producer Okawa about himself).

Got all that? In any case, it all leads up to an apocalyptic battle between the forces of good and evil, or–as the Godom Empire’s swastika iconography and inspiration by the likes of Karl Marx and Charles Darwin indicate—God and godlessness.

The endlessly convoluted mumbo-jumbo might be bearable if director Isamu Imakake had infused the proceedings with any semblance of wit or humor, but considering that he was working from a screenplay credited to “The Mystical Laws Scenario Project” that was probably a non-starter. The animation is equally lackluster, more reminiscent of Saturday morning cartoons than the dynamic visuals of first-rate anime.

If the dreary Mystical Laws was designed by its creating organization as some sort of recruitment tool, then they clearly have a lot to learn from the Scientologists.