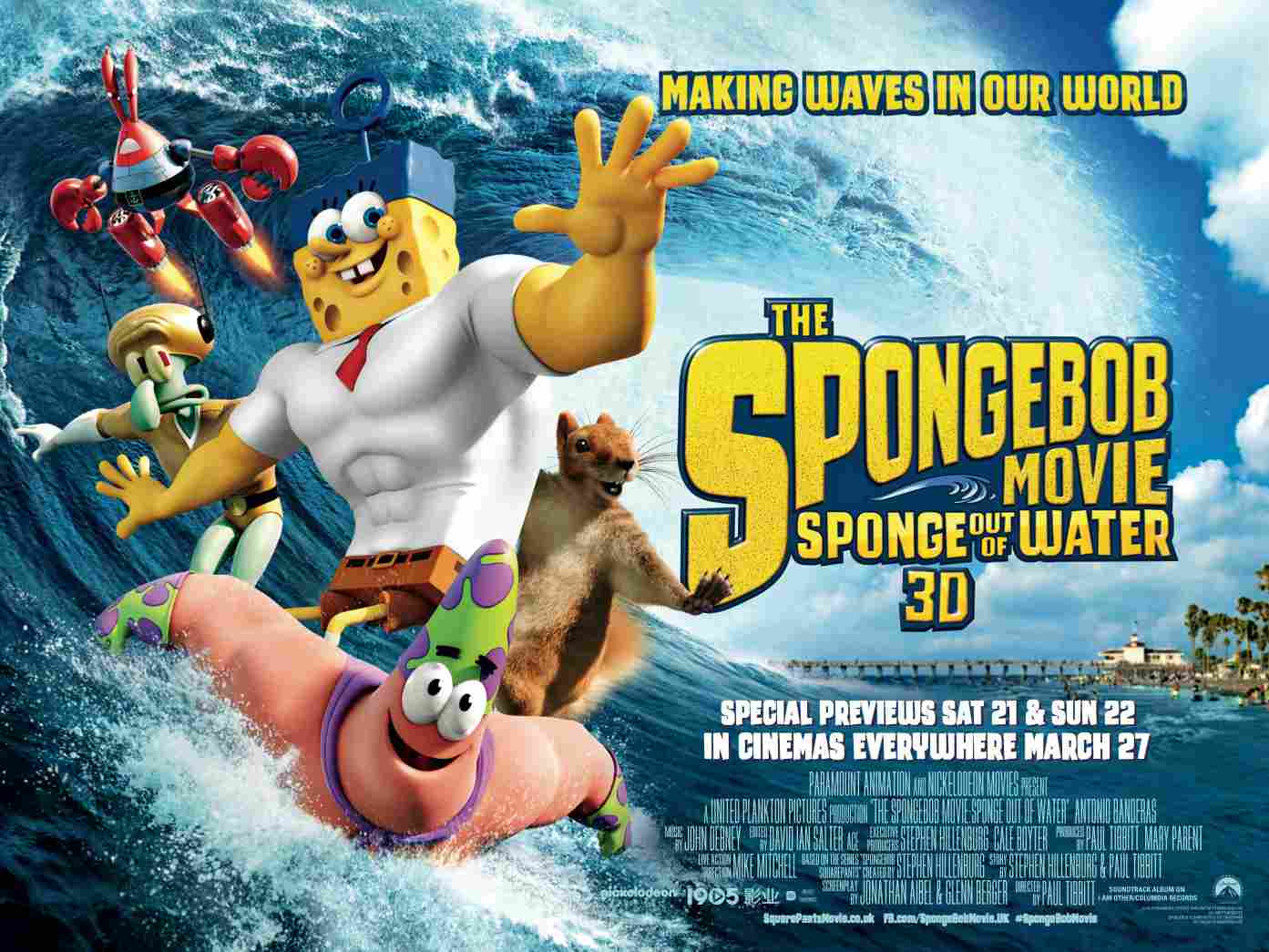 SpongeBob SquarePants comes ashore and embarks on an adventure to recover Krabby Patty’s secret formula, which is stolen by Burger Beard, a pirate.

The SpongeBob Movie: Sponge Out of Water is a 2015 American 3D live-action/animated comedy film directed by Paul Tibbitt in his directorial debut. It is the second film adaptation of the animated television series SpongeBob SquarePants and a sequel to The SpongeBob SquarePants Movie (2004). The film stars Antonio Banderas and features the show’s regular voice cast who reprised their roles in the television series and the previous film.[7] The plot follows a pirate named Burger Beard, who steals the secret Krabby Patty formula using a magical book that makes any text written upon it come true. SpongeBob and his friends must travel to the ocean’s surface to confront Burger Beard and retrieve the formula.

The film was written by Jonathan Aibel and Glenn Berger, who adapted it from a story conceived by Tibbit and SpongeBob SquarePants creator Stephen Hillenburg. Like the first film, the final act places the animated characters in a live-action world. These scenes were directed by Mike Mitchell and were filmed in Savannah and Tybee Island, Georgia. Filming began on October 9, 2013 and was completed in November that year. The film is dedicated to Ernest Borgnine, the voice of Mermaid Man, who died in 2012.

The SpongeBob Movie: Sponge Out of Water was released in the United States on February 6, 2015 and received mostly positive reviews from critics. It was a box office success, earning over $325 million worldwide against its $60–74 million budget, making it the third-highest-grossing Nickelodeon film and fifth-highest-grossing animated film of 2015. A third film, The SpongeBob Movie: Sponge on the Run, was released in 2020.

As the film opens, a pirate named Burger Beard travels to Bikini Atoll, where he obtains a magical book that has the power to make any text written upon it real. The book tells the story of SpongeBob SquarePants and his adventures in the underwater city of Bikini Bottom. SpongeBob works for Mr. Krabs at the Krusty Krab fast food restaurant, where he cooks Krabby Patties. SpongeBob has spent several years protecting the secret formula of the Krabby Patty from Plankton, the owner of the Chum Bucket eatery.

One day, Plankton attacks the Krusty Krab in an attempt to steal the formula. After a battle involving giant foods and condiments, Plankton feigns surrender and uses a decoy of himself to give Mr. Krabs a fake penny, in which the real Plankton hides to gain access to Krabs’ vault. Plankton steals the formula, leaving a fake document in its place. SpongeBob catches Plankton and they fight over the formula, which disappears.

Without the secret formula, Krabby Patties cannot be made, causing customers to become ravenous. SpongeBob is the only one who believes Plankton is innocent; he creates a giant soap bubble, in which they fly away. Bikini Bottom is immediately reduced to a wasteland due to the absence of the much-relied-on Krabby Patty. After a scuffle between Burger Beard and some seagulls, a page of the book is discarded in the ocean and lands on Sandy Cheeks‘ tree dome, causing Sandy to think the page is a sign from the “sandwich gods”. SpongeBob proposes teaming up with Plankton to find the formula but Plankton does not quite understand the concept of teamwork. They decide to travel back in time to the moment before the formula disappeared and go to the Chum Bucket to rescue Karen, whom they want to help power the time machine. SpongeBob and Plankton assemble the machine and travel far into the future, where they meet Bubbles, a magical dolphin who acts as an overseer of the galaxy, and inadvertently get him fired. SpongeBob and Plankton retrieve the formula but it turns out to be the fake one left by Plankton.

Burger Beard converts his pirate ship into a food truck and sells Krabby Patties at a beach community. Sandy suggests making a sacrifice to appease the gods. As the town attempts to sacrifice SpongeBob, he and Mr. Krabs smell Krabby Patties. The townsfolk follow the scent, which leads to the surface. Bubbles returns, reveals he hated his job and repays SpongeBob by granting him and his friends the ability to breathe on land. Bubbles launches SpongeBob and the others to the surface.

The team, now animated in CGI, lands on a beach and finds the source of the Krabby Patty scent is Burger Beard’s food truck. Burger Beard stole the formula using the book to rewrite the story; he uses it to banish the gang to Pelican Island. SpongeBob uses the page Sandy had to transform himself and the others into superheroes – The Invincibubble (SpongeBob), Mr. Superawesomeness (Patrick), Sour Note (Squidward), The Rodent (Sandy), and Sir Pinch-a-Lot (Mr. Krabs) – but they leave the page and Plankton behind. They return and find Burger Beard, who drives away with the formula, and give chase. During the ensuing battle, the team destroys the book but Burger Beard overpowers them all.

Plankton appears as a muscle-bound hero named Plank-Ton and assists them. Plankton and SpongeBob create a bubble attack to defeat Burger Beard and retrieve the Krabby Patty formula. After sending Burger Beard flying to Bikini Atoll, Plankton – having learned the value of teamwork – returns the formula to Mr. Krabs. The gang uses the final page’s magic to return to Bikini Bottom. With Krabby Patties back, the city is returned to normal and Plankton resumes his role as business rival and villain.

In a final scene, Burger Beard along with his seagulls in the Bikini Atoll island, sings the SpongeBob SquarePants theme song, until Bubbles arrives and sings a rap battle against the seagulls, resulting in them winning, finishing the song and ending the film.