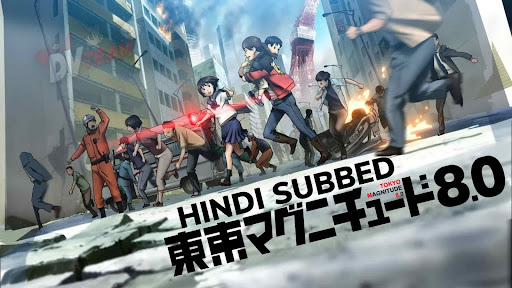 Middle school student Mirai Onozawa is dissatisfied with her family circumstances and, in a moment of frustration, wishes to tear everything apart. Unfortunately, these destructive thoughts seem to come true in the form of a magnitude 8.0 earthquake just a few moments later.

When summer vacation begins, Mirai reluctantly takes her younger brother Yuuki to Odaiba, where a robot exhibition that he wanted to go to is being held. However, while they are in the exhibition center, the fury of a major earthquake shakes the Kanto region; helpless, both kids witness the devastating power of this natural disaster as it brings the city to its knees.

In its aftermath, they stumble upon Mari Kusakabe, a motorcyclist and single mother who decides to help the young siblings. Aiming to return to their homes and reunite with their families, the group sets off on a long and hard journey through the decimated city.

with Natsuko Takahashi handling series composition, Atsuko Nozaki designing the characters and Kow Otani composing the music. The series centers on two young siblings, Mirai and Yūki, and single mother Mari who the two meet in the aftermath of a major earthquake hitting the Japanese capital, placed in the near future (2012).

It won the Excellence Prize in the Animation category at Japan’s Media Arts Festival in 2009. It was announced that the series has been licensed for a release in North America by Maiden Japan released on April 2013.

After a massive earthquake in Tokyo 25 km under the sea at a magnitude of 8.0, two young siblings Mirai and Yūki, who were visiting a robot exhibition in Odaiba at the beginning of their summer vacation, struggle to reach their parents in their house in Setagaya, assisted by a female motorcycle courier named Mari, who is striving to reach her own daughter and mother in Sangenjaya. Together, the three of them brave the partly ruined city and try their best to make it home safely.