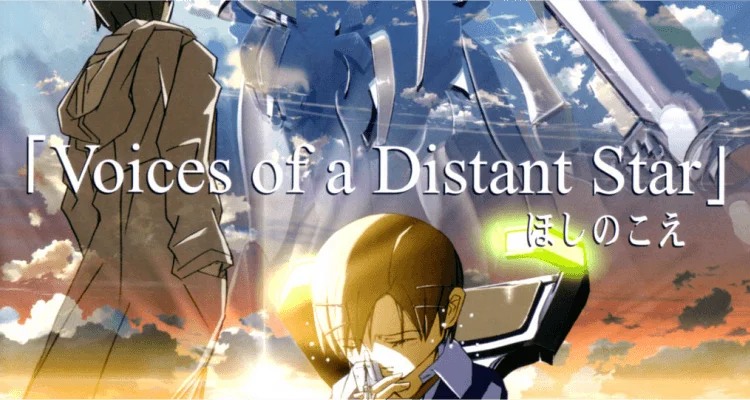 Voice of A Distant Star Hindi Dub, Voices of a Distant Star is a Japanese science fiction original video animation short film created and animated by Makoto Shinkai. It follows the lives of two close childhood friends, a boy and a girl, who get separated once the girl is sent into space to fight in a war against aliens.

Voices of a Distant Star (Japanese: ほしのこえ, Hepburn: Hoshi no Koe, lit. “Voices of a Star”) is a Japanese science fiction original video animation (OVA) short film created and animated by Makoto Shinkai. It follows the lives of two close childhood friends, a boy and a girl, who get separated once the girl is sent into space to fight in a war against aliens. As the 15-year-old girl goes deeper and deeper into space, the texts she sends take longer to reach the Earth; the film simultaneously follows her battles and the boy’s life as he receives her texts over the years.

The OVA premiered in Japan in February 2002 in an advance screening. It was followed by two DVD releases on April 19 and October 6, 2002. ADV Films licensed the OVA for release in North American and the United Kingdom, Madman Entertainment licensed it for Australasia and Anime Limited, for the United Kingdom. In 2002, it won the Animation Kobe award for packaged work. It also won the 2003 Seiun Award for Best Media. It was very positively received by critics, who praised its artistic dimension, plot, and music; the English-language version, however was criticized for its dubbing.

The OVA was adapted into a drama CD by Pioneer LDC and a novel was written by Waku Ōba, illustrated by Makoto Shinkai and Kou Yaginuma, and published by Media Factory‘s imprint MF Bunko J. Makoto Shinkai adapted a manga from the OVA, illustrated by Mizu Sahara; Kodansha serialized it in its manga magazine, Afternoon, from April 2004, and released the manga as a one-shot on February 23, 2005. The manga was licensed for a North American release by Tokyopop, which published it on August 1, 2006.

Voice of A Distant Star Plot

A schoolgirl named Mikako Nagamine (Mika Shinohara (original Japanese), Sumi Muto (Japanese) Cynthia Martinez (English) is recruited into the UN Space Army to fight in a war against a group of aliens called the Tarsians—named after the Tharsis region of Mars where they were first encountered. As a Special Agent, Mikako pilots a giant robotic mecha called a Tracer as part of a fighting squadron attached to the spacecraft carrier Lysithea. When the Lysithea leaves Earth to search for the Tarsians, Voice of A Distant Star Hindi Dub.

The narrative begins in 2047. Mikako is apparently alone in a hauntingly empty city, trying to contact people through her mobile telephone. She wakes up in her Tracer orbiting an extrasolar planet. She then goes to Agartha, the fictional fourth planet of the Sirius Solar System. Mikako sends an e-mail to Noboru (which shows the date 2047-09-16), with the subject “I am here”, which would reach him eight years later. Some flashes of imagery, perhaps indicative of memory, a hallucination, or even a mystical encounter, are then shown. Voice of A Distant Star Hindi Dub.

The room shown at the beginning of the animation is presented again; Mikako is squatting in the corner, sobbing and pleading with her doppelganger to let her see Noboru again so she can tell him she loves him. Voice of A Distant Star Hindi Dub.

The ship’s alarm warns Mikako that the Tarsians are surrounding her, but she does not understand. A climactic battle ensues. On Earth, Noboru receives the message almost nine years later. At Agartha, three of the four carriers equipped with the warp engines which brought the expeditionary force to Sirius have been destroyed. The Lysithea is still intact after Mikako joins the fight and stops its destruction. After winning the battle, Mikako lets her damaged Tracer drift in space. Voice of A Distant Star Hindi Dub.

In the manga, 16-year-old Mikako sends a message to 25-year-old Noboru, telling him that she loves him. By this time, Noboru himself has joined the UN, which has launched a rescue mission for the Lysithea. When Mikako hears that the UN is sending help for their rescue, she consults a list of people on the mission, and finds that Noboru is among them. The manga ends with Mikako saying that they will definitely meet again. Voice of A Distant Star Hindi Dub.

Voice of A Distant Star Trailer